Certain terms may be used more by CPA, IFC, NPHC or USFC members than others.

Alumnus member who serves as a resource to chapters and act as a liaison between alums and collegiate members.

Given and wore over the heart at all official functions with at least business attire by initiated members of the organization.

A formal invitation to join a particular IFC fraternity/CPA sorority extended by a chapter.

The last day of recruitment in which new members receive bids to join a particular IFC fraternity/CPA sorority.

Terms used for mentors assigned between new members and actives/prophytes. The active members/prophytes are typically charged with guiding new members through their new member period and initiation.

A yell used mostly by NPHC organizations (although some NIC, NPC and local orgs have calls as well) to promote pride in their organization and greet brothers/sisters. Non-members are not permitted to use another organization’s call.

A small group of a larger organization, regional or Inter/National headquarters, typically designated by a specific Greek name established at a University or college.

An initiated member of a fraternity or sorority currently in college.

Term typically referring to a place that is designated as “alcohol-free” including a fraternity which does not permit alcohol on their chapter house premises and may not allow the organization to host a party involving alcohol. Fraternities can be dry at the Inter/National level or chapter level. Sororities each have different levels of “dry”. For example, one may allow the sorority to attend a function hosted by a non-dry fraternity, while another sorority may not. 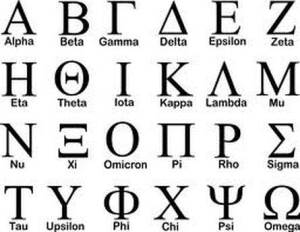 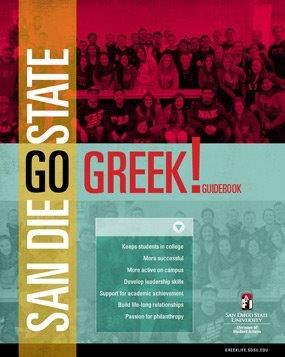 Get a ton of information about the SDSU Greek community in one place!

The Go Greek! Guidebook is a great resource to SDSU students and parents looking to learn more about SDSU Greek Life! Contents include:

Monetary cost of membership in a fraternity/sorority; fees are used to cover the costs of operation, formal events, social activities, and other events, depending on the organization.

Applied to students who are members affiliated with Greek organizations.

The central office of the Regional/Inter/National Greek organization of a particular fraternity/sorority. These offices are responsible for making policies for the organization that are meant to be implemented through all of its collegiate chapters. It is most accurate to use the term “headquarters” as opposed to “nationals” as many organizations are international with chapters in the U.S.A. and Canada.

A person hired to live in the chapter house. Responsibilities vary per chapter.

A meeting held by a chapter for prospective members who are seeking general information about the organization.

The membership selection process for historically African-American sororities and fraternities.

An undergraduate who has been initiated into life-long membership.

A process during which new members receive lifelong membership privileges into the organization they have chosen to be a part of. This is typically and formal, ceremonial type event where active member of the group are also present. Events are private and different for all organizations. Culturally-based and NPHC organizations use the term “crossing”. Chapters initiate/cross members at various times.

Individuals who are members of the same intake class.

Overseer of the membership intake process.

The newest members of an organization; typically designated as such until another intake process occurs.

Student who has accepted the bid or invitation for membership of a Greek organization but has not yet been initiated/crossed.

Stands for North American Interfraternity Conference and is the national governing body of SDSU’s IFC community.

stands for National Panhellenic Conference and is the national governing body of SDSU’s CPA community.

Refers to either a community service and/or fundraising project sponsored by a chapter or the non-profit organization in which an organization has specified as it’s official “philanthropy” signifying a special relationship and desire to give (time/money) to the organization, sometimes officially named by the inter/national organization.

A show used to introduce new members of the organization.

A show used to refer to older members of the organization. Typically used by culturally-based organizations (particularly NPHC).

A college student not affiliated with a fraternity/sorority who is eligible and shows interest in joining by attending recruitment/intake activities. The term is often abbreviated to PNM.

Active SDSU sorority member who serves on the CPA side of recruitment in order to guide Potential New Members during the process of formal recruitment.

A secret ceremony of a Greek organization performed by active fraternity/sorority members that is prescribed and endorsed by the chapters’ headquarters. The document containing the rituals and elements therein are sacred to each fraternity/sorority. Only initiated members may be privy to rituals.

Term used to identify members of the same sorority/fraternity.

A mentoring relationship between a new member and an established chapter member generally selected while the new member is going through the intake process.

A series of complex, synchronous, and precise rhythmic body movements performed to the tune of stomps, songs, or chants created by organization members. A Step Show hosts all members of NPHC chapters from anywhere doing step/stroll.